With a 1,360 year history, Torigoe Matsuri is an old festival. It is held in early June at Torigoe Shrine and it’s surrounding streets.

Tons of mikoshi (portable shrines) are paraded through town, (and directly through the streets lined with food stalls!) and return to Torigoe Shrine by lantern light.

Mikoshi that just got back to Torigoe Shrine

The highlight of this festival is the Senkan Mikoshi. The Senkan Mikoshi (also called the “Obake Mikoshi” (lit. Monster Mikoshi)), the heaviest in Tokyo, is carried by 150 – 200 people weighs four tons. It is supposed to bring good luck to the team carrying it.

There are also tons of food stalls, stalls with games,

I lucked out and won a little glass turtle!!

for some reason there was a Trump mask

Torigoe Shrine is within 10 to 20 minutes of Ueno, and Ueno Zoo is very proud of it’s pandas, so one of the stalls was selling little panda shaped honey sweets

Chocolate bananas with flashing light up rings on top seem to be popular this year! 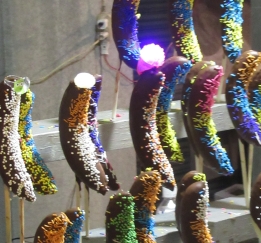 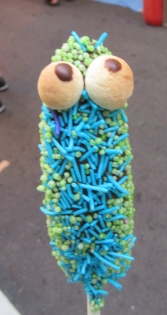 Light up ring or not, some of the bananas are pretty cute!!